President Richard Nixon didn’t think cigarettes were anything to joke about when he signed the Public Health Cigarette Smoking Act into law on April 1, 1970.

Warnings on cigarette packages had started appearing in 1965 following the 1964 report, Smoking and Health, Report of the Advisory Committee to the Surgeon General of the United States.

With Nixon’s endorsement, the anti-tobacco movement kicked into high gear.

What’s common knowledge today was big news at the time when cigarette advertising included doctor endorsements, pictures of babies and even Santa Claus. Generally, the public already had an inkling of the problems smoking caused, but there was still plenty of doubt as everyone waited to hear from the country’s leaders.

The act made it illegal for cigarette advertisements to be aired on American radio or television. It also carried an amendment to the 1965 Cigarette Labeling and Advertising Act, to make the warnings on cigarette packaging in the name of the Surgeon General, providing the well-known warning, “The Surgeon General Has Determined that Cigarette Smoking Is Dangerous to Your Health. 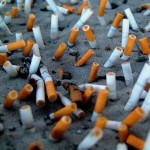 Mark Barrus is the Director of Healthy Life Centers. I have been in the Hypnosis industry for over 20 years, and have written many articles about the efficacy and effectiveness of Hypnotherapy to overcome unwanted habits and actions. Twenty years of Case Study research and examination have helped me to inform the industry on the results and be a leader in the field. I originally worked with Dr. Richard Neves, the former head of the American Board of Hypnotherapy. training other Hypnotherapists in Advanced Smoking Cessation protocols. In February 2005, we also started Healthy Life Centers, in Orange County, CA