Don’t Be Afraid of Your Very Last Cigarette 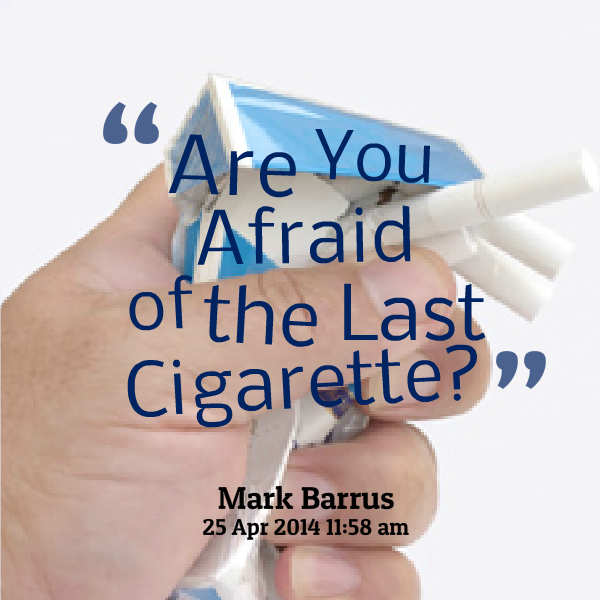 Your smoking habit is a ritual of one cigarette after another, and another. Plus futzing with the lighter, and making sure you have plenty of matches, etc., So try to look at as just that one in your hand. It’s really not a pack a day, or a carton a week, it’s really all about one at a time, because you can only smoke one at a time.

Stopping smoking is both Mental and Physical. Rather than use a drug that merely deals with the physical, try something that is completely natural, and will help you with the most difficult part of stopping smoking, and that is the “mental” aspect of a habit that you have probably have been dealing with for decades.

Hypnosis can help you if you want the benefit of being a non-smoker more than continuing to smoke. Plain and simple.

A good Hypnotist, or Hypnotherapist, can then help you to disassociate your unconscious “triggers” from your habit.
These triggers are pretty common for most people. They include having a smoke after a meal, when you get up, while driving, while watching TV, etc.,

However, my biggest trigger was boredom. I could always kill 10 minutes with a cigarette, so I was rarely bored for over 25 years.

The problem is obviously that this was a dangerous method of killing boredom, so I came to terms with that.

You will have a lot of free time on your hands after you stop smoking, so get ready for that. Discuss it with the Hypnotherapist. He, or she, will help you to replace that initially with things that you already like to do, and are good for you. (don’t expect to have them suggest to learn to play the violin) 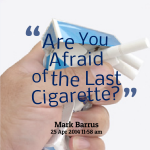 The other main trigger that most of us have is stress. We all experience stress every day and have different ways of coping with it. Smokers deal with it the best way they know-how, and that is to light up. It gets your mind off your problem for a split second, so it works in the short term.

Smokers are also under a lot of stress to stop smoking. When someone tells you to stop, the reaction is usually “Gee I really want a cigarette right now”

Do not put smokers under unnecessary pressure to stop smoking. They are under enough stress as it is.

If you want to help them, merely get them to visualize how good that they are going to feel a couple of weeks after its over. Their sense of smell and taste return and they get more energy. It gets easier to walk up a flight of stairs, etc.,

After a few days of not smoking, and looking forward to all its benefits, the physical side to smoking also is greatly diminished, simply by not adding any more of the toxin/drug nicotine. The whole thing becomes redundant.

However, the Physical side of stopping smoking is where the money is for Marketers.
The FDA announced again that they will review the risks of psychiatric and behavioral side effects with Pfizer’s anti-smoking drug Chantix in a public meeting in October

A public meeting should be fun. I love attending those.

Since 2009 Chantix has carried the government’s strongest safety warning — a “black box” label — because of links to hostility, agitation, depression, and suicidal thoughts. The warning was added after the FDA received dozens of reports of suicide and hundreds of reports of suicidal behavior among patients taking the smoking-cessation drug.

What that also means is that your doctor is probably guilty for not sitting you down and telling you the extensive adverse effects, as well as side effects, that the drug can cause.

Your Doctor may have mentioned that you may experience bad dreams, suicidal thoughts, yada yada, but I guarantee you one thing: Your Doctor did not tell you that he, or she, would not themselves EVER take a dangerous drug like that one.

Their response may also have been, “It beats smoking”, or “It’s safer than smoking”.

My advice to you is to look forward to all that you will be gaining by throwing away a habit that you don’t even want anymore.

Look forward to your last cigarette, and don’t look at it like you’re in line for a roller coaster, and then you take the chicken exit.

There’s nothing to be afraid of except living longer, feeling better, and needing a lot more money to pay for those extra years of life.