Onychophagia, Nail Biting – Hypnosis Can Help, if You Want Help 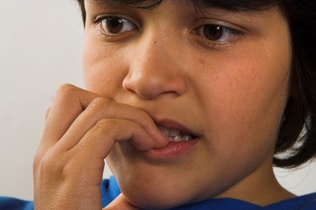 Nail-biting is something that I’ve been doing since I was probably five years old.

For many years I just did it without even thinking about it.

I can remember as far back as has 50 years ago of not being able to stop biting my nails. Of course, everybody would tell me not to, but it was something that was uncontrollable

Actually I still struggle with a little bit today, but hypnosis can help.

The medical term is called Onychophagia, and the medical industry is now recognizing hypnosis as a possible therapy and possible cure for Onychophagia. Of course is only if the client wants to help because hypnosis will not work unless you actually want to change.

Hypnosis can help the hand to mouth movement, and sticking your fingers in your mouth.

The medical industry is now also suggesting hypnosis as a possibility. In the past what the doctors were doing was just telling their clients that you can get diseases and bacteria, and whatnot, and using scare tactics. Hypnosis is a positive clinical solution, as long as the client is on board with that change.

John Rosemond contributes the following on Onychophagia to The Charlotte Observer

Medical doctors and psychologists refer to nail-biting as onychophagia. Most nail-biters don’t develop any serious side effects, but prolonged biting can result in dental problems, viral and bacterial infections and parasites. But giving this information to nail-biters in an attempt to scare them into stopping rarely works.

He also discusses cures for nail-biting:

Online, one finds various “cures,” mostly involving bitter stuff painted on and around the offender’s nails. Parents who’ve used products of this sort usually tell me their children become accustomed to the taste and keep right on biting. At your son’s age, clinical hypnosis might be helpful, but only if he is highly motivated to stop. Contrary to myth, hypnosis cannot cause someone to do something – give up smoking, for example – that the person does not already want to do 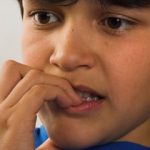