Would You Smoke in a Car With Your Children in it?

Why Does Your State Allow Smoking in the Same Car with Children Inside?

I just wanted to talk about the importance of the laws that prohibit adults from endangering innocent children.

This includes children all the way up to 18 years of age, who we tend to think of as adults by that time.

Idaho is the next State that is petitioning a law that would prohibit such behavior.
Only California, Utah, and Oregon have such laws on the books.

I’m glad that Tavia Pickett of Idaho is trying to follow California’s lead by banning smoking in cars with children,
Local News 8 Reports:

A local group is pushing for a statewide ban on smoking in cars with children. The group, composed of several mothers, has started a petition and even reached out to elected officials.

Tavia Pickett and her children regularly stand at busy intersections in Idaho Falls with handmade signs supporting the ban. While Pickett’s gotten plenty of positive response, she’s the first to admit that not everyone seems to care for her proposal.

I commend Tavia Pickett for her dedication to her cause, and not to let the detractors keep her from sticking to it.

I believe the fine is $100 for the first infraction here in California, but unfortunately it is not enforced as much as we would like. It’s very similar to people driving while talking on the cell phone or texting while driving which is also dangerous, and has about the same fine associated with it.

“Even rolling down a window does not stop the children from breathing in the small pollutants that are coming into their bodies,” said Pickett.

She and other group members have started a petition that’s already garnered over 300 signatures, but it still falls short of their 2,000-signature goal. 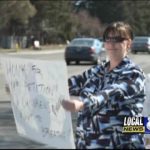 In addition to the paper petition, the group also has an online petition

The main thing is that you should find out if your state has any petitions that you can sign regarding this issue.

You may consider signing a petition to get it on the ballot, so people can vote for it.

Our children are our future it’s very important.